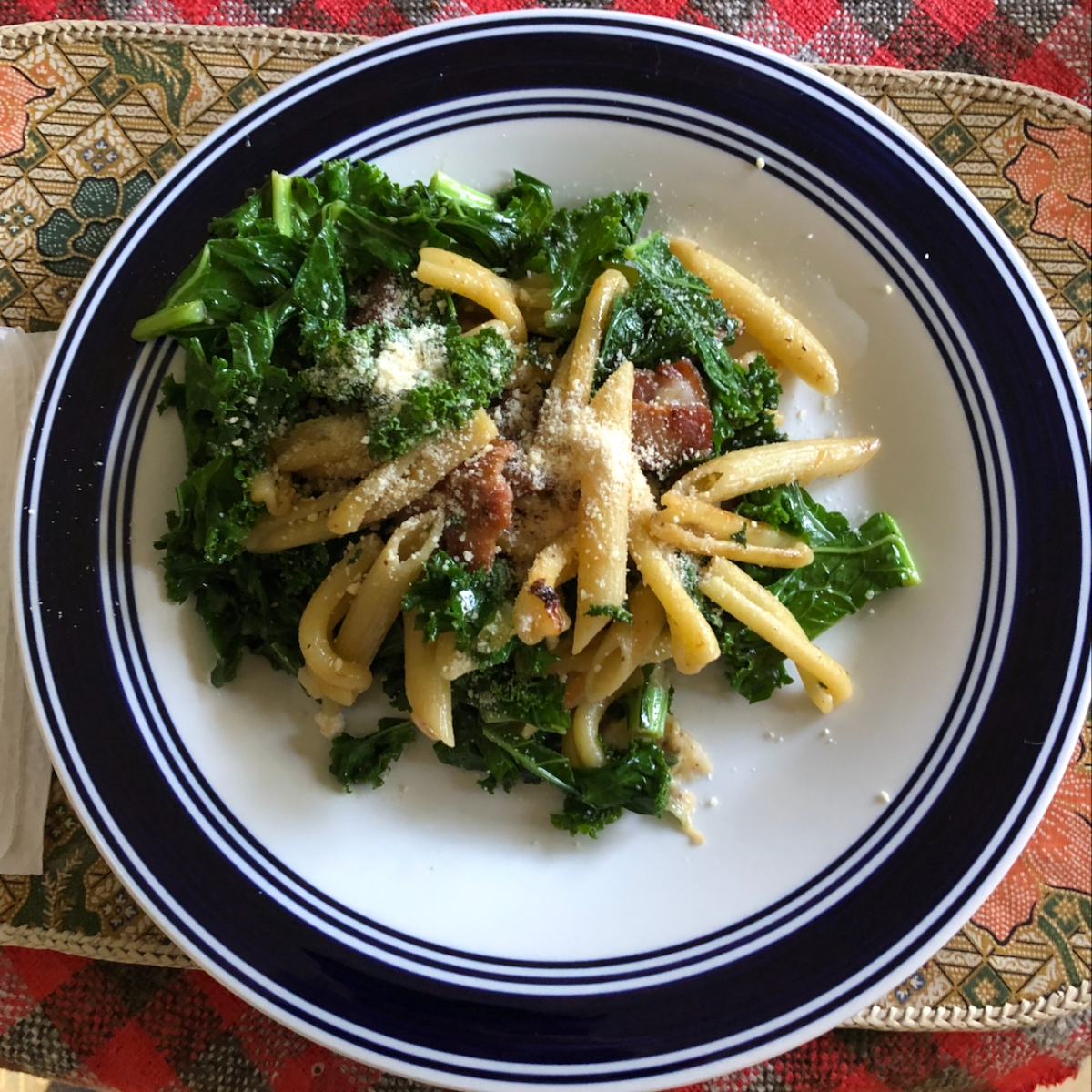 Like me, kale prefers cooler climates. This may explain why I enjoy it so much, although it might just be my European heritage. Kale has been one of the most popular green vegetables in Europe for at least two thousand years. The Greeks and Romans who loved the vegetable may have brought it to northern Europe, but many food historians suspect that the Celts carried it with them when they migrated across the continent and ended up in Ireland.

Besides having a wonderful fresh flavor, kale is a great source of important vitamins and minerals. One cup of steamed kale has more vitamin C than an eight ounce glass of fresh orange juice, more calcium than a cup of milk and more potassium than a banana–all this with only 50 calories and four carbs.

During the year I spent in Germany kale was on the menus in fine restaurants, school cafeterias and neighborhood Gaststüben. You could buy it fresh at the market in front of the cathedral in Muenster even when snow covered the cobbles. Farmers just dug the kale out of the snow and sold bunches of it crisp and green to eager housewives and hungry students.

We like it steamed as a green vegetable, in soups or combined with pasta. This combination of pasta and kale is a very simple recipe, but if you make it with good smoked bacon you will have a delicious side dish or main course. We try to get fresh crisp curly kale, but you can use flat leaf kale as well.

Feel free to change the proportions of ingredients to suit your taste, but follow the recipe the first time!

Cook the pasta according to the directions on the package. While the water is heating and the pasta is cooking, prepare the other ingredients.

Clean and chop the onion and wash and remove the tough stems and large center ribs from the kale. Shred the kale with a sharp knife

Cut the bacon into half inch pieces and fry it over low heat in a large skillet. When the bacon is nearly done, add the chopped onion. Cook it slowly for three or four minutes. Do not brown the onion or allow the bacon to become crisp. Remove the skillet from the heat until the pasta is cooked al dente.

Return the skillet to the heat, add the kale and toss it until it is slightly wilted. Add the drained pasta with about 1/4 cup of grated Parmesan cheese and toss thoroughly. Season lightly with salt and pepper and serve with extra Parmesan at the table.

NOTES: I prefer to use penne rigate for this recipe, but I have used rotini and macaroni. Anything except lasagna noodles should be fine.