Cherry spoon sweet is a wonderful way to satisfy anyone’s sweet tooth. The flavor is so intense that one or two teaspoonfuls are usually enough to let you return to a diet of celery or baby carrots without feeling cheated.

The only serious drawback to this recipe is that you really need a cherry pitter. Spoon sweet is normally made with fresh sour cherries, but sweet cherries work fine too. Fresh cherries have pits in them, and the pits are virtually impossible to remove from the fruit without a pitter. You either have to buy a pitter or ask your friends if they have one they are willing to lend. 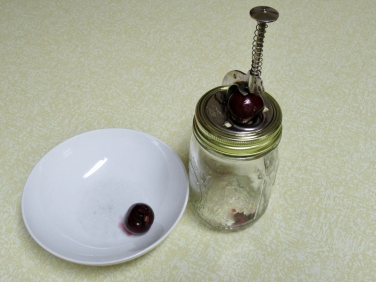 We are fortunate to have such a friend. Rich and his wife Audrey bought a neat pitter that fits on top of a standard Mason jar. You just set the pitter on top of a pint jar, secure it with a canning ring and start pitting your cherries. The pits fall into the jar, making the operation neat and clean.

Spoon sweets probably originated in areas surrounding the eastern Mediterranean. Today they are popular in Egypt, Turkey, Greece, the Balkans and Russia. They are a variety of preserve that may be made with many different fruits and even with some vegetables and flowers. Once they have been cooked in the thick syrup, spoon sweets can be canned and stored like jellies and jams so it is possible that they were invented by people who hated to watch fresh fruits go to waste when there were more than could be consumed when they were in season.

If you are like me, you will enjoy making and sharing this lovely dessert with friends and relatives. Give it a try. If it is too sweet for you by the spoonful, garnish a dish of ice cream with some or spread it on your toast at breakfast.

Wash and remove the stems and pit the cherries and spread half of them in a medium-sized glass or stainless steel bowl. Sprinkle one cup of sugar over the cherries. Spread the rest of the cherries over the sugar, cover them with the second cup of sugar and gently pour a cup of cold water into the bowl. Tip the bowl to make sure that all the sugar has been moistened.

Cover the bowl with plastic wrap and put it into the refrigerator for about twelve hours. Take the bowl from the refrigerator and stir the cherries to make sure that the sugar has mixed with the water and cherries. Stir gently to keep from crushing any cherries. Pour the cherries and juice into a three quart saucepan. Set the pan over high heat until the mixture begins to boil.

Put a couple of saucers into the freezer after you stir in the vanilla. When the cherries have simmered the fifteen minutes, take one of the chilled saucers from the freezer and drip two or three drops of juice from a spoon on to the saucer. If the juice is the right consistency, after a few seconds it will barely run when you tip the saucer a little.

This resembles the test used to check if jelly is done. In this case, however, you are testing whether you have a thick syrup. If the drops are runny, continue simmering the cherries for another three minutes, then test again.

When the juice passes the drip test, stir in a tablespoon of lemon juice and simmer for two more minutes. Remove the pan from the stove and set the pan aside to cool.

After the cherries are at room temperature, pour them into a container with a good lid. A quart canning jar works fine.

Store your cherry sweet in a cool cabinet or pantry and serve it by teaspoonfuls in small dessert dishes or over ice cream or yogurt. It will keep several days without refrigeration.

NOTES: Be as careful as you can to keep from mashing the cherries. Part of the charm of this sweet is that the fruit retains its identity in the syrup.

The cherry pitter occasionally misses the pit, so you should be cautious when eating cherry sweet. I have found that it helps to position the cherry with the stem scar upwards towards the plunger.

One bright summer morning a few years ago when I was shopping at the Farmers Market in Cable, Wisconsin, a small carton of bright red cherries caught my eye.

“You bet,” said the young woman sitting behind her table, “I have one tree, but it gave us a lot of cherries this year.”

“How much for the carton?”

She looked a little uncomfortable as she answered, “Three dollars.”

She relaxed when I asked whether she had any more. I already had thoughts of a cherry pie like my mother used to make.

The cherry vendor retrieved two more cartons from below the table. One was only half full. “I’ll take them all. How much do I owe you.”

“Would seven dollars be okay?” Soon I was on my way back to the cabin with my treasure.

A day later and home in New Richmond, I called our friend Rich to ask if I could borrow the cherry pitter that he and his wife Audrey had bought on one of their many visits to Door County, the cherry district of Wisconsin. Rich had loaned it to me a few years earlier when we brought back cherries from Michigan.

The cherry pitter worked great, but pitting nearly three pounds of cherries convinced me that it was too hot to bake a pie. Thus came the inspiration to make a sour cherry jam that would taste like the best part of a cherry pie—the cherries.

Mom called them “pie cherries.” She bought a large tin can of frozen pie cherries every year from a man with a refrigerator truck who stopped at our house. He was from Door County, which is probably why I used to think that Wisconsin was a leading state for sour cherry production. However, though Wisconsin does grow a lot of sour cherries, we rank far behind Michigan and even behind Utah, Washington and New York.

We didn’t have a big chest freezer when I was growing up, so we had a flurry of cherry pies after the cherry man had left. Mom did keep some in jars in the refrigerator freezer, and although I don’t remember it, she may have made cherry jam. The recipe below is not from my mother, but I am sure she would approve of it.

As with all jams and jellies, preparing the fruit is the hard part. Once that is done, it takes only a few minutes to make the finished product. Here is the way to do it.

Wash and sterilize enough jars and lids to hold at least seven cups. This recipe makes about six cups of jam, but it is wise to have that extra jar in case you have a tablespoon or two of jam left over after filling six jars.

Sterilize the jars by washing them thoroughly and inverting them in a nine by thirteen-inch baking pan that has about an inch of water in it. Set the pan on the range, bring the water to boiling and simmer the pan for a few minutes, tipping the jars slightly to allow the hot air to escape. Turn off the heat and transfer the jars to drain on a cooling rack a few minutes before the jam is done.

Wash, stem, and pit the cherries. Chop them into small pieces, an eighth to a third of an inch dice.

Measure the sugar into a bowl and set it aside. Have the bottle of almond extract ready for use.

Put the cherries, pectin and a half teaspoon of butter into a Dutch oven or soup pot over moderate heat. Stir the mixture almost continuously until it comes to a rolling boil. A rolling boil is one that keeps bubbling when you stir it.

While the chopped cherries are heating, put a small saucepan with enough paraffin in it to make two thin layers of paraffin on the jars on a burner over very low heat. Be careful not to heat the paraffin more than just to melt it.

When the cherries have come to a rolling boil, stir in the sugar, bring the mixture back to a rolling boil and boil for one minute, stirring frequently. Remove the pan from the heat, add the almond extract and stir for a minute or so. If necessary, skim off any foam. There is seldom much foam on this jam.

Using a dipper and a funnel, fill the hot jars, leaving one-third to one-half-inch head space. If necessary, use a piece of moistened paper towel to remove any dribbled jam from the inside of the tops of the jars.

Use a tablespoon to put a thin layer of melted paraffin on top of the jam in each jar and allow the jars to cool without moving them. After the jam is completely cooled, add a second thin layer of paraffin.

NOTE: This year, someone beat me to the cherry lady’s table at the Farmers Market, so I had to make do with unsweetened frozen sour cherries from the supermarket. They worked fine and were already pitted, so making the jam was a snap. However, after I chopped and measured the fruit, there were a few cherries still left in the package.

Since I didn’t want to waste those beautiful cherries, I just risked it and added the two extra tablespoons of chopped fruit to the mixture. I added another tablespoon of sugar and two tablespoons of cold water that I used to rinse some pieces of cherry out of the measuring cup. All went well because cherries have a lot of natural pectin, but be careful not to overdo this.

It is important to measure things exactly for most jam and jelly recipes to ensure the proper proportions needed for jelling. In particular, do not try changing the proportions of ingredients for chokecherry jelly or orange marmalade. I speak from experience.