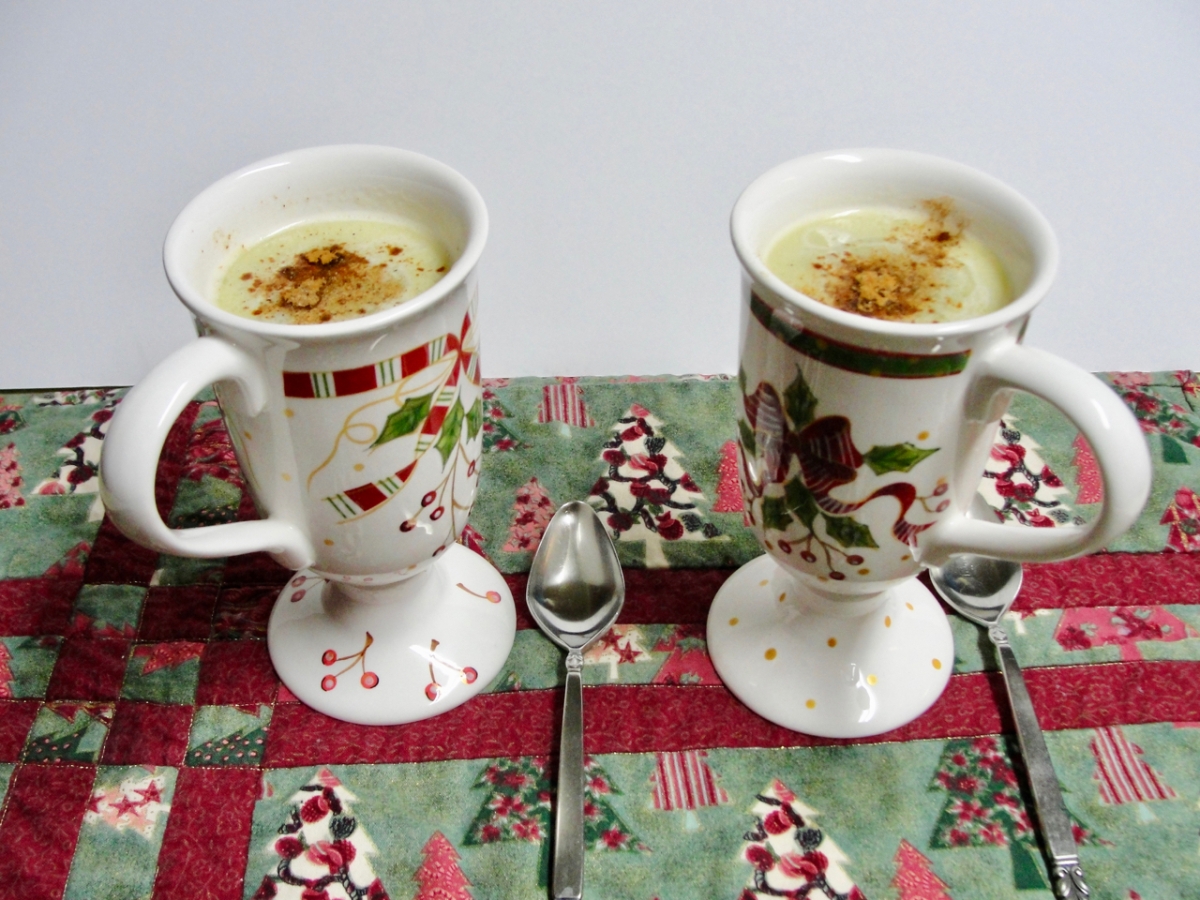 Over the years I have enjoyed many different versions of this traditional winter drink, but Mom’s Hot Buttered Rum is still my favorite. I remember having my first small and very weak taste of this drink when I was seven or eight years old. We moved into the country shortly after my seventh birthday, and I remember sitting in front of the wood and coal heating stove in the living room of that small house feeling very grown up as I shared a holiday cup with Mom and Dad.

Mom stored a pint bottle of brandy in a kitchen cabinet that she used to make hot toddies for anyone with a bad cold in the winter. For us kids, her recipe was a tablespoon of brandy, two tablespoons of lemon juice, two tablespoons of sugar, a cup of boiling water and a dash or two of nutmeg. After we had finished our medicine, she would rub our chests with Vicks VapoRub, help us into warm pajamas and send us to bed. As I recall, her cure worked pretty well.

Her recipe for hot buttered rum was even simpler than the one for her toddies. She bought a pint of rum for it before Christmas every year. I make it today with unsalted butter, but Mom used regular salted butter, and it tastes good with either kind. Here is how to make an eight ounce cup of that wonderfully warming holiday drink.

Make sure that the butter is at room temperature.

Bring two cups of water to boiling and fill a cup with hot water. When the cup is hot to the touch, empty out the water and put the butter, brown sugar and rum into the cup. Add enough hot water to fill the the cup and stir until the butter is melted and the sugar is dissolved. Top with dashes of cinnamon and nutmeg. Stir and enjoy.

NOTES: Feel free to experiment with the quantities of butter and sugar, but my advice is not to increase the amount of rum. These warmers are treacherous.

Next year New Orleans will celebrate its 200th birthday, an occurrence that deserves to be celebrated by every American who enjoys good music and food. Both owe much of their excellence to the unique history of New Orleans. Founded on May 7, 1718, by a Frenchman, Jean-Baptiste Le Moyne de Bienville, the city rapidly became the busiest port city on the north coast of the Gulf of Mexico. French colonists arrived who were joined by Spanish immigrants after the city and territory of Louisiana were ceded to the Spanish government in 1763. And as every schoolchild learns, the young United States bought New Orleans as part of the Louisiana Purchase in 1803.

The French and Spanish colonists brought African slaves, many from the Caribbean, and soon everyone was mixing together with native Americans. There was also a considerable addition of northern Europeans who headed south from places as far away as the Maritime Provinces and New England states to find fortune and warm weather. Not all found their fortunes, but there was enough warm weather for everyone, so they stayed and prospered.

New Orleans became a cultural salmagundi as people shared their languages, customs, religions, music and food. The ingredients were mixed together and stirred until something new was created that most everyone liked. In school we learned that the United States was a melting pot. New Orleans music provides a good example.

Consider Louis Moreau Gottschalk, born in New Orleans in 1829 to a Jewish businessman from London and a Creole mother. By 1860 Gottschalk was the best known pianist in the New World and a respected composer. His compositions are still in the classical piano repertoire. Better known today is jazz which was born in New Orleans and blues that grew up in the city, and both musical genres owe their genesis to the rich cultural history of the people living along the Mississippi River.

But when I think of New Orleans, I think first of the many recipes created by the Creole chefs of New Orleans and the Cajun cooks of the surrounding area. Oysters Rockefeller, shrimp étoufée, red beans and rice, gumbo and jambalaya are good examples. My favorite jambalaya recipe uses more ingredients and takes twice as long to make as this simplified version, but if you are in a hurry or just plain lazy on a hot day, this recipe for ham jambalaya is a good substitute. With it, you can make enough in half an hour to satisfy four hungry people.

Start by cooking the rice. Put two cups of water, a cup of white rice and a half teaspoon of salt into a one quart saucepan. Stir the rice as it comes to a boil, then reduce the heat to a simmer and cook it until the water is absorbed, about fifteen or twenty minutes.

While the rice is cooking, remove the stem and root ends from the the onion and chop it into a quarter-inch dice. Wash, remove the stem, seeds and white membrane from the pepper and chop it into a half-inch dice. Remove the paper from the garlic cloves and mince them. Put the onion, pepper and garlic into a skillet with the tablespoon of oil over medium heat. Stir occasionally and cook for about five minutes until the peppers begin to soften.

While the vegetables are cooking, chop the ham into a half-inch dice. Stir the tomatoes with their juice, the chicken broth, ham and Cajun seasoning into the vegetables. Bring the mixture to a boil, reduce the heat and simmer for seven to eight minutes.

Stir in the rice, bring the jambalaya back to a simmer. Simmer for a minute or two if necessary to reduce the liquid. Taste and adjust the seasoning.

Remove the skillet from the heat. Serve in bowls with bread and salad.

NOTES: This recipe makes a very mild jambalaya. You might want to put a bottle of hot sauce on the table for guests who appreciate more spice. Rather than buying a jar of Cajun seasoning, you can make your own in a just a couple of minutes. Here is a recipe.

Grind everything together with a mortar and pestle or just stir the ingredients together, mashing them a little with a wooden spoon. This recipe makes enough for two or three batches of jambalaya.

If you are careful to buy gluten-free ingredients, you can satisfy guests with gluten intolerance.