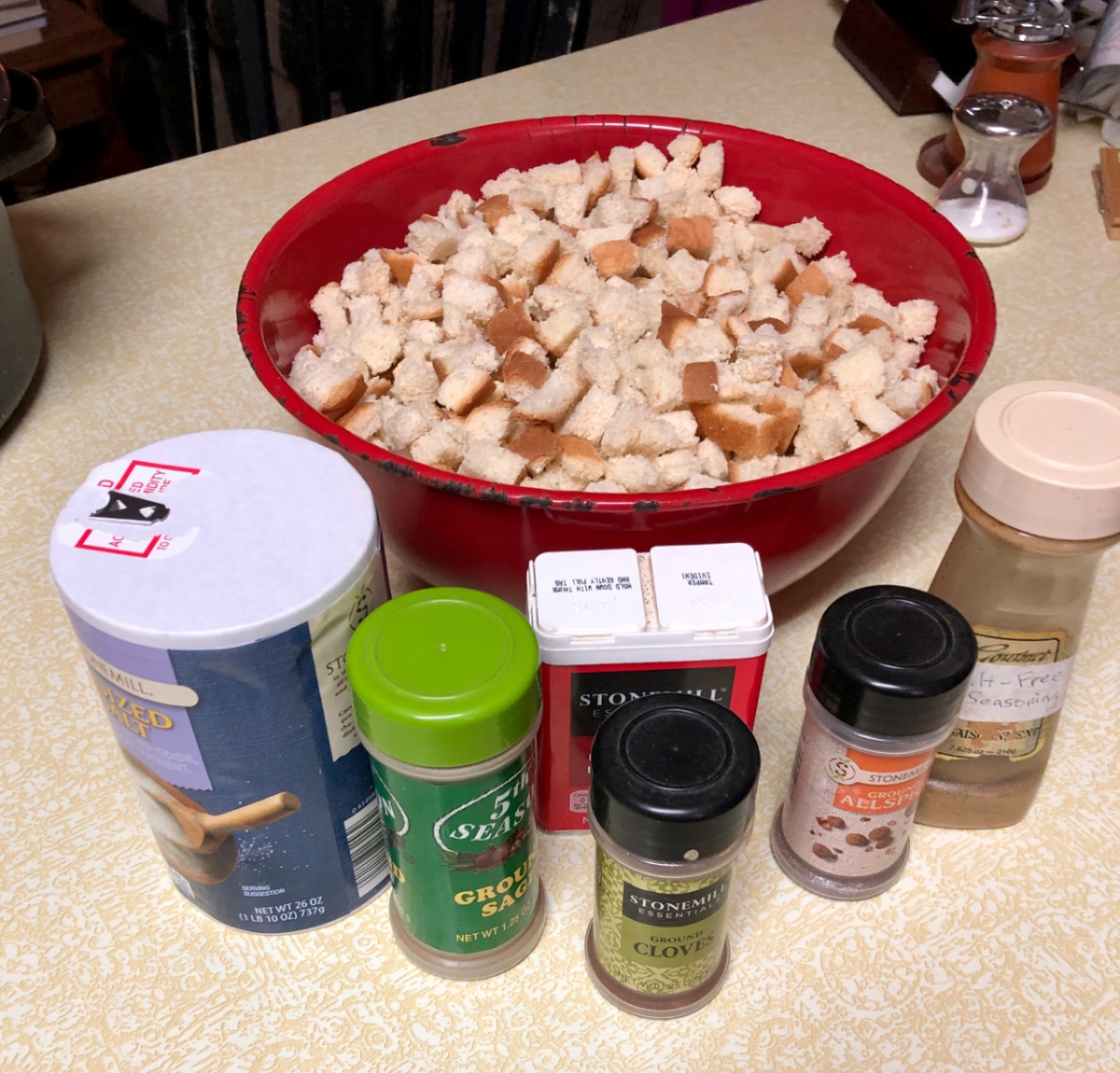 I don’t know how my Mom made turkey dressing.  At first I was too young to be interested in something as dull as bread stuffed into a turkey.  Later, when I was a teenager, I was deer hunting with my Dad and his friends on Thanksgiving Day.  By 1:00 PM, our deadline to be back for dinner, the turkey was out of the oven and the dressing was done.  At Christmas I was usually busy with gifts brought by Santa or from grandparents and various aunts and uncles.

Jerri has been roasting our Thanksgiving and Christmas turkeys for fifty years, and they taste just as good as the ones my mother cooked.  The dressing is just as delicious too, so I finally decided to get Jerri’s recipe.  “I don’t have a recipe,” she said, so I offered to watch her make her dressing and record what she did.  Determining quantities was tricky, but with only a few snarls, we managed it, and the dressing was as delicious as usual.

Jerri starts her turkey dressing the evening before the holiday dinner.

The night before you make the dressing, cut a loaf of white bread into half-inch cubes. Spread them in a couple of nine by thirteen-inch baking pans and warm your oven to 115º or 120º.  Turn off the oven and set the pans on the center shelf.  If you want, you can stir the bread cubes after an hour or so.  The cubes should be fairly dry when you mix the dressing.  If some are still a bit soft, that is okay.

The next morning, clean and finely chop the celery and onion to about an eighth-inch dice.  Melt two tablespoons of butter in a small skillet over moderate heat and cook the vegetables until they are soft but not browned.

Put the bread cubes into a large mixing bowl and sprinkle the salt and spices over them. Add the celery and onion along with a cup of broth and begin mixing everything gently together.  Continue adding broth and mixing the dressing until all the cubes have been dampened but not mashed.

We always bake some of the dressing stuffed inside the turkey, which is why we call it stuffing.  Here is what Jerri does.  Season the inside of the turkey cavity with about three-fourths-teaspoon of salt and pack it lightly with dressing.  Put the extra dressing into a casserole or soufflé dish to bake separately.  Jerri puts this dressing into the oven about an hour before the turkey is done.

While the turkey is roasting there is plenty of time to peel the potatoes, cook the cranberry sauce, mix the green bean casserole and wash the sweet potatoes that will go into the oven about an hour and a half before the turkey is done.  The pie and dinner rolls were baked the day before.  Jerri will rouse me to carve the turkey and mash the potatoes while she sets everything out.

Or almost everything:  One year in a wicked moment, I did end my dinner prayer with “And Lord, please make the salt and pepper appear on our table.”  Jerri was not amused.

NOTES:  Jerri uses two cans of chicken broth for her dressing.  She sprinkles the spices directly from the bottles, so the measures are more art than science.  “I never make it the same way,” she says again, and often she adds something weird, like seasoning salt, but it always tastes wonderful.

When I asked my siblings for recipes that I might use on Courage in the Kitchen, my sister Betty offered this one. She says that Mom and Dad liked it when they visited her and Rollie. My brother-in-law has died, so Betty doesn’t cook as much as she used to, but this was one of the recipes she made often years ago.

It is a version of a midwest comfort food that many of us remember from our childhoods. With just six ingredients, it is quick and easy to prepare. I have added two steps to the preparation. Betty said that she just laid the bacon strips over the top of the casserole, but I like the results when the bacon is chopped into bite-sized pieces and cooked a few minutes before being added to the batter.

Scalloped corn is an excellent side dish to complement beef, pork or chicken.

Preheat the oven to 375º, grease a one quart casserole and crush the crackers. Reserve two tablespoons of crackers to sprinkle on top of the casserole or crush a couple of extra crackers when you are topping it off.

Cut the bacon into half-inch pieces and fry it over moderate heat until it just begins to brown. The bacon should not be crisp.

Beat the egg until it is lemon yellow in a mixing bowl. Add the corn, milk and crackers to the egg along with half of the bacon. Season with a quarter teaspoon of freshly ground black pepper and a dash of salt. Stir well and pour the batter into the casserole. Top with the remaining bacon and crackers.

Bake uncovered forty-five to fifty minutes. Use a table knife inserted near the center of the casserole to check for doneness. If the knife comes out clean, the casserole is done.

NOTES: Be careful with the salt in this recipe as three of the ingredients have plenty of salt. The amount of salt I use is about what I sprinkle on an egg cooking for breakfast.

This recipe makes four generous servings. If you are cooking for a larger party, you can double the ingredients and extend the cooking time a few minutes.