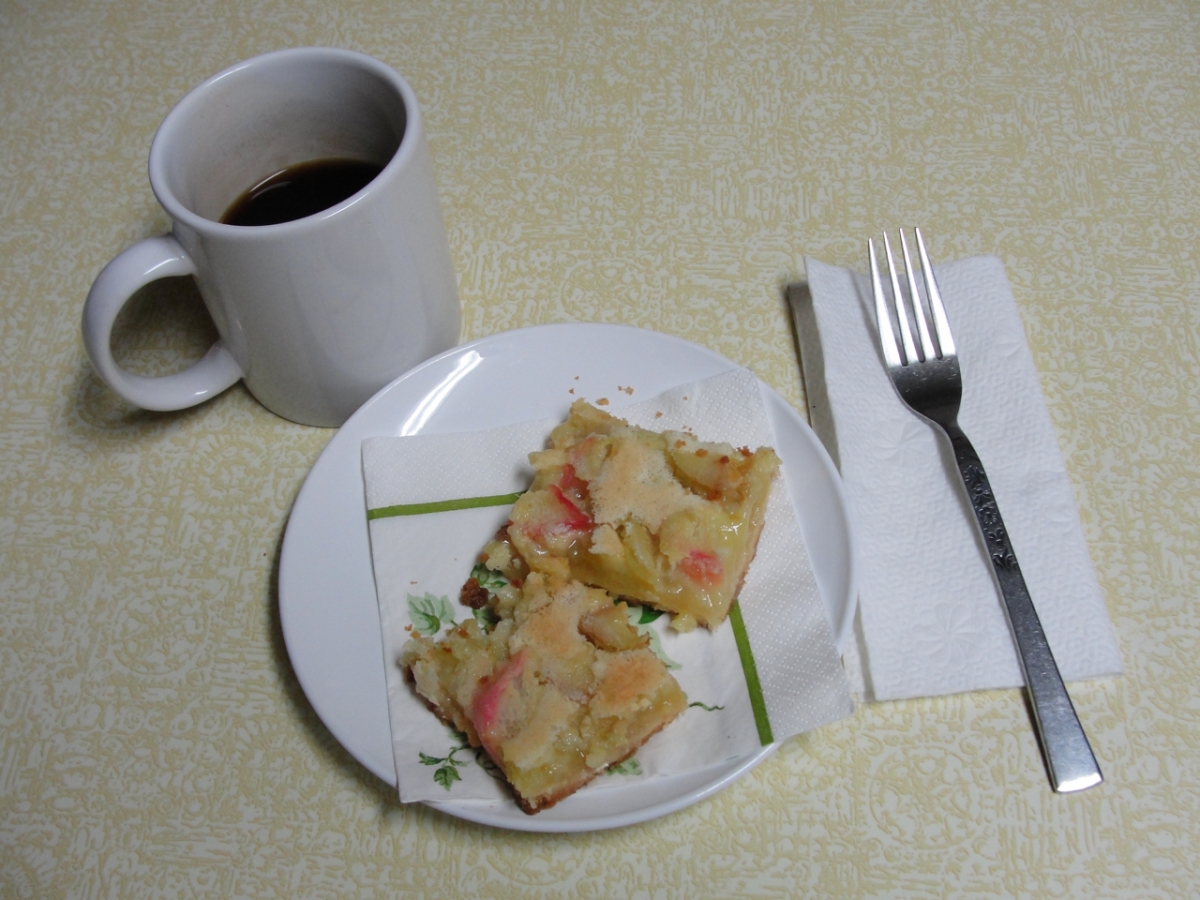 Here is another recipe from our friends Dale and Pegi. When she sent us the recipe, Pegi explained, “I don’t recall where I got this recipe but it’s been a family favorite for a very long time! It’s the only way Dale likes rhubarb and Chad’s favorite.”

We also enjoy Jean’s Rhubarb Bars, which have a different crust than Pegi’s. 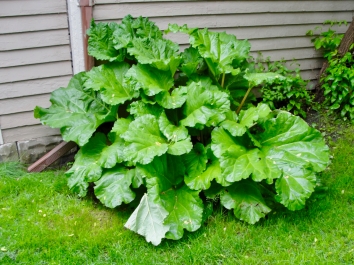 Spring is the time when rhubarb is in its prime. Ours looks magnificent this year. Here is one more way to turn rhubarb into a wonderful dessert.

Take a stick of butter from the refrigerator an hour or so before starting this recipe. If you forget you can very carefully soften the butter in the microwave. Preheat the oven to 350º.

Mix one cup of the flour with the powdered sugar in a mixing bowl and cut in the butter with a fork or pastry blender until you have particles like small peas as if you were making a pie crust. Grease a seven by eleven-inch baking pan. Using your fingers, press the flour mixture into the bottom of the pan. Bake the crust for eighteen to twenty minutes until it begins to brown slightly on the sides. Remove it from the oven and let it cool a bit while you finish the filling.

Pour the rhubarb mixture on top of the pre-baked crust and bake for thirty to thirty-five minutes until a knife inserted into the center of the pan comes out clean.

Remove the pan from the oven and cool it completely. Cut into squares.

NOTE: Pegi says you can make these bars in a nine by thirteen-inch pan if you prefer thinner bars.

Here is another recipe from Nellie, my brother-in-law’s stepmother. Her rhubarb raisin pie is the basis of Patsy’s strawberry rhubarb pie, and both use crackers as part of the thickening and flavoring agents. Both pies are delicious and are worth being added to the list of things you bake for family and friends.

Even better, both pies are simple and virtually foolproof to make. Here is what you do.

Start by making the dough for the crust. Here is my recipe for plain pie crust. Roll out half the dough and line the bottom of a nine-inch pie plate.

Fill the crust with the rhubarb mixture, roll out the top crust and seal it to the bottom. Use a sharp knife to cut some slits in an attractive pattern to let steam escape from the baking pie. Dust the top crust with a little granulated sugar.

Set the pie on the center shelf of your oven and bake it for about an hour. After thirty minutes or so, cover the edges of the crust with foil to prevent them from getting too brown.

Bake the pie until the filling bubbles and the top crust begins to turn a golden brown, an hour or a little longer.

NOTE: This pie is especially good with a scoop of ice cream.