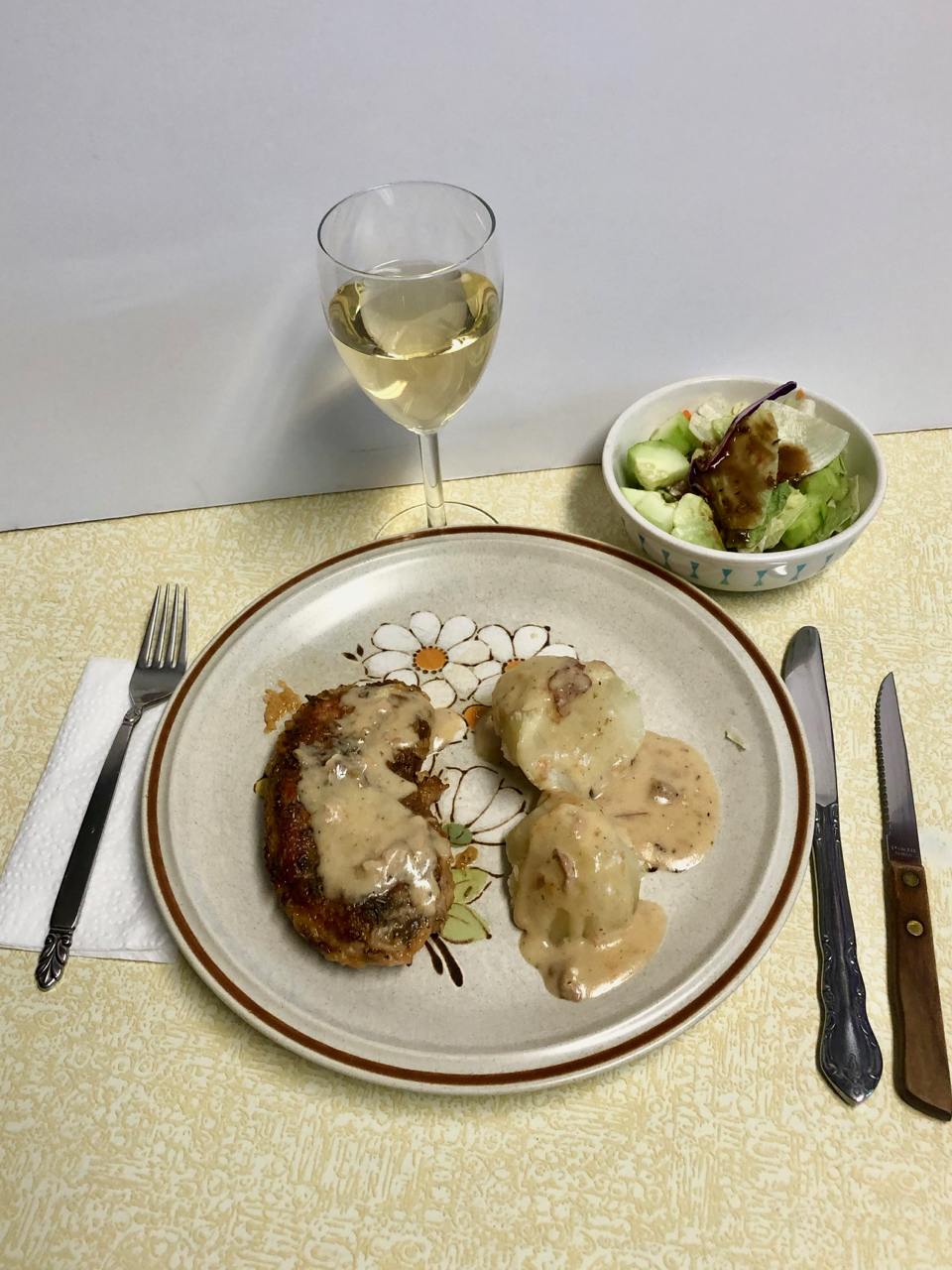 A Google search of the World Wide Web produces about nine million pages of recipes for pork chops  and gravy.  If we assume that ninety percent of the pages simply repeat recipes, that still leaves about nine hundred thousand recipes.  And if we further assume that ninety percent of those recipes have only minor differences, that still leaves us with ninety thousand different recipes.

And if…..but enough playing with numbers.  I think that we can agree there are lots of recipes for pork chops with gravy.  To paraphrase the Preacher who wrote the Book of Ecclesiastes, “Of the making of many pork chop and gravy recipes there is no end.”

However, this is a really tasty pork chop and gravy recipe that is very simple to make.  The spices produce a hint of Thanksgiving or Easter dinner with sage stuffing in the turkey or roast lamb rubbed with rosemary.  I like ordinary milk gravy with pork chops, but this version is special.  I hope that you enjoy it too.

While the pork chops are browning, grind the remaining spices in a mortar or crush them with a spoon in a cup.  Turn the chops and allow them to brown a couple of minutes, then sprinkle the spices over the chops and add the wine.

Cover the skillet and reduce the heat.  Simmer the meat twenty-five to thirty minutes until the chops are tender

While the meat is simmering, peel two or three large potatoes, chop them into about one and one-half-inch pieces and boil them about twenty minutes in water seasoned with a teaspoon of salt until they allow a fork to penetrate.

Remove the chops from the skillet and keep them warm on a covered serving platter.  Stir about two tablespoons of flour into the pan and use a fork to blend the brown bits in the pan with the flour.  Add a small amount of oil or butter if necessary.  Lightly brown the flour for about two minutes, then stir the the milk into the pan and bring the gravy to gentle boil.  Cook for two to three minutes until the gravy has thickened.  Add a little more milk if the gravy is thicker then you want.  Taste and adjust the seasoning.

Serve with the boiled potatoes and a green salad.  Pass the gravy, salt and pepper.

NOTES:  If you don’t have whole milk, you can add a couple tablespoon of half and half or simply forget about it.  The gravy will be okay, if not quite as smooth and silky.