Grandpa and Grandma Rang’s farm was two miles from their church at Phipps, Wisconsin.  Trinity Lutheran Church was a modest white clapboard church built in 1905 on land donated by a parishioner.  Another family donated five acres across from the church for a cemetery.  The church was demolished many years ago, and trees grow where I once recited Bible verses, but the cemetery is still maintained, and we visit it regularly to put flowers on the graves of my parents.

My first memories of church services and other activities all involve that little church.  My mother and father were active members, which meant that we kids were also part of that church family.  It was there that I learned that one should fill the front pews out of respect for the minister, that you didn’t need fancy clothes but you should wash and wear clean pants and shirts and that you kept quiet and paid attention during the service.  Mom made sure that I was dressed in a clean white shirt and wore a clip-on tie every Sunday.

I remember potlucks with lots of food and time to play with the other kids while our fathers met on church business with the minister and our mothers visited with each other.  By the time I was five or six I was one of the kids who had walk-on roles in the Christmas play.  While the older kids were dressed as angels, Mary or Joseph or the three Wise Men and recited scripture, we little kids pretended to be shepherds or, worse, sheep.

It must have been a Christmas service that persuaded Grandpa and Grandma Rang to take their family to church on a snowy December night in 1922.  My father told me the story many years ago.  In the summer, the family rode to church in their Overland touring car, but in winter they traveled by horse and sleigh.  On that occasion, however, the snow was so deep that the horse could not pull the sleigh.

“Pa broke trail, and George and Margaret who were bigger helped tramp down the snow.  I helped Stub get through it and Ma made sure no one got lost.    It took us a while, but we made it in time for the service.  The minister’s wife had hot cider for everyone afterwards in the parsonage next door to the church.

“It was easier walking home, because we had made a pretty good trail.  Harold (my father’s younger brother) was born about two months later.  Ma and Harold did just fine.”

Today I think often of this story when church is canceled because of a winter snow or ice storm warning.  My wife explains, “People don’t want to have an accident driving in bad weather.” I don’t reply, but the temptation is there:  “Couldn’t they just walk?”

Though Dad did not mention them, I would be nearly certain that the minister’s wife would have put out a plate of cookies to fortify the parishioners for their walks home.  One Sunday when Connie Schultz and her daughter Teri were hosting the coffee and treats after the service, they had made an old-fashioned raisin oatmeal cookie that I’m sure would have been familiar to the minister’s wife and my father.

Teri told me that they are one of the first cookies she remembers making with her grandma Rachael Schultz.  They aren’t overly sweet but are delightfully moist.  Connie explained that boiling the raisins was probably the reason why the cookies stayed so moist.  Whatever the explanation, the recipe for these cookies deserves a place in your recipe box.

Start by bringing the eggs and a cup of butter to room temperature by setting them out an hour or so before starting the cookies.

Put a cup of raisins into a small saucepan and cover them with water.  Bring the pan to a boil, reduce the heat and simmer the raisins for ten minutes.  Remove the pan from the heat and let the raisins cool a bit.

While the raisins are cooling, cream together the sugar and butter in a large mixing bowl.  Add the eggs, spices, and five tablespoons of the raisin liquid to the creamed sugar.  Sift half of the flour and soda into the liquid ingredients, then stir in the oatmeal followed by the rest of the flour.  Drain the raisins and blend them and the walnuts into the batter.  You will have a moist batter.

Drop batter by rounded teaspoonfuls onto greased cookie sheets and bake at 350º for ten to twelve minutes until the cookies begin to brown on the edges.  Cool them on wax paper and store the cookies in an airtight container.

NOTES:  In case you are wondering, a pinch of salt is about a sixteenth of a teaspoon, roughly the amount you can pick up with your thumb and first two fingers.  If you are using unsalted butter, use a quarter of a teaspoon of salt.

If the batter looks a little too moist, you can stir in a tablespoon or two of flour at this point. 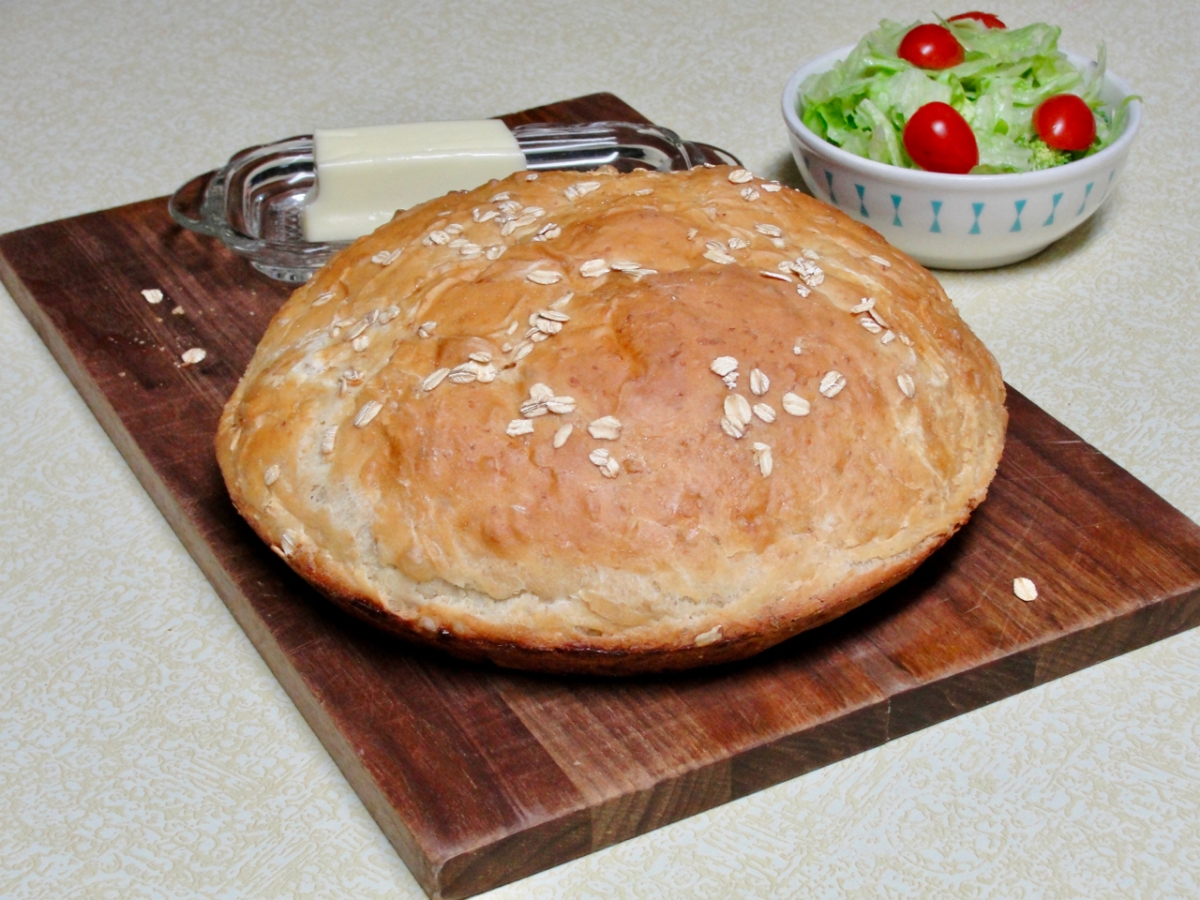 I first made this bread while we were on vacation. I don’t remember where we were vacationing, though I am sure that it was at a resort where the fishing was good. As I review my many failings as a husband and father, I especially regret not taking our family on more vacations far away from places where the primary resource was water harboring trophy fish for fathers and plenty of ravenous panfish for mothers and children.

I lay the blame squarely at the feet of my parents, who both liked to fish. There are over one hundred named lakes within a thirty-mile circle of Hayward, Wisconsin, and we fished at least a quarter of them while I was growing up. We couldn’t afford vacations, but we could afford a day trip to a lake that Dad or Mom wanted to see and fish.

While Mom packed a picnic lunch, my sisters and I helped Dad dig angleworms and load the car with bait, rods, tackle boxes, paddles, swim suits, towels and 6-12 Mosquito Repellent plus a blanket or two to sit on. Finally, Dad lifted the canoe on top of the car and tied it down with our cane poles fastened beside the canoe. Soon we were off to a familiar lake or on our way to explore a new one.

Those were glorious adventures that I think help explain how we ended up at a primitive cabin that didn’t even have any bread pans on a cold rainy day when even I didn’t want to sit in a boat catching more walleyes. We already had some nice fillets in the refrigerator.

“Fresh bread,” I said, “would go good with the walleye.”

“And baking bread would help warm up the cabin,” observed my wife.

The kids applauded the idea of being able to take off their coats on what was supposed to be a summer vacation.

And so I baked some bread from memories of helping my mother. We had brought the ingredients with us, not because we planned on baking bread, but because we liked to cook good meals. Luckily I had tossed in a package of yeast with the idea of making some yeast-raised pancakes. Since we had no bread pans, I made free-form loaves. The egg wash gave them a nice finish.

This is a moist and hearty bread that keeps well.

Stir a quarter teaspoon of sugar and two teaspoons of yeast into half cup of warm (105º) water and allow the yeast to proof. When bubbles begin to form on the surface of the water, you know that your yeast is alive and well. You have proofed or tested it.

Put two and a half cups of water in a saucepan, add a dash of salt and bring the water to a boil. Stir in the oatmeal and cook for five minutes. Remove the pan from the heat and empty the pan into a large mixing bowl. Add three teaspoons of salt, a quarter cup of sugar, four tablespoons of butter and a half cup of cup milk. Add three cups of flour, one at a time and stir them in well. Let this mixture cool until it feels warm but not hot. Stir in the yeast and allow this thin sponge to sit until you see bubbles rising to the surface.

Add about three cups of flour one cup at a time, mixing well after each addition until you have a moist but thick dough. Flour a breadboard or countertop with a half cup of flour and scrape the dough out of the bowl. The dough will be sticky to work with, so use a baker’s scraper or spatula to turn the dough and begin working flour into it. Knead the dough until it is elastic and no longer sticky, adding flour as necessary.

Grease the bread bowl and turn the dough to cover the surface when you put it into the bowl. Cover the bowl with a damp cloth and let it rise until doubled in bulk. Grease a large baking sheet.

Remove the dough from the bowl, knead it for thirty seconds or so and divide it into three parts. Make three balls and place them on the baking sheet. Cover them with the damp cloth and allow them to rise until the dough is again doubled in bulk.

Preheat the oven to 350º while the loaves are rising.

Separate the egg and beat the white with a teaspoon of cold water. Brush the tops of the loaves and sprinkle some oatmeal on top.

Bake about forty minutes in a 350º oven. The bread is done when an instant read thermometer inserted near the center of a loaf reads 190º. Or do what my mother always did: Tap on the bottom of a loaf. If it sounds hollow, the bread is done.

NOTES: You can use butter, lard or shortening to grease the bowl and baking sheet. You can also bake the balls in greased pie plates.