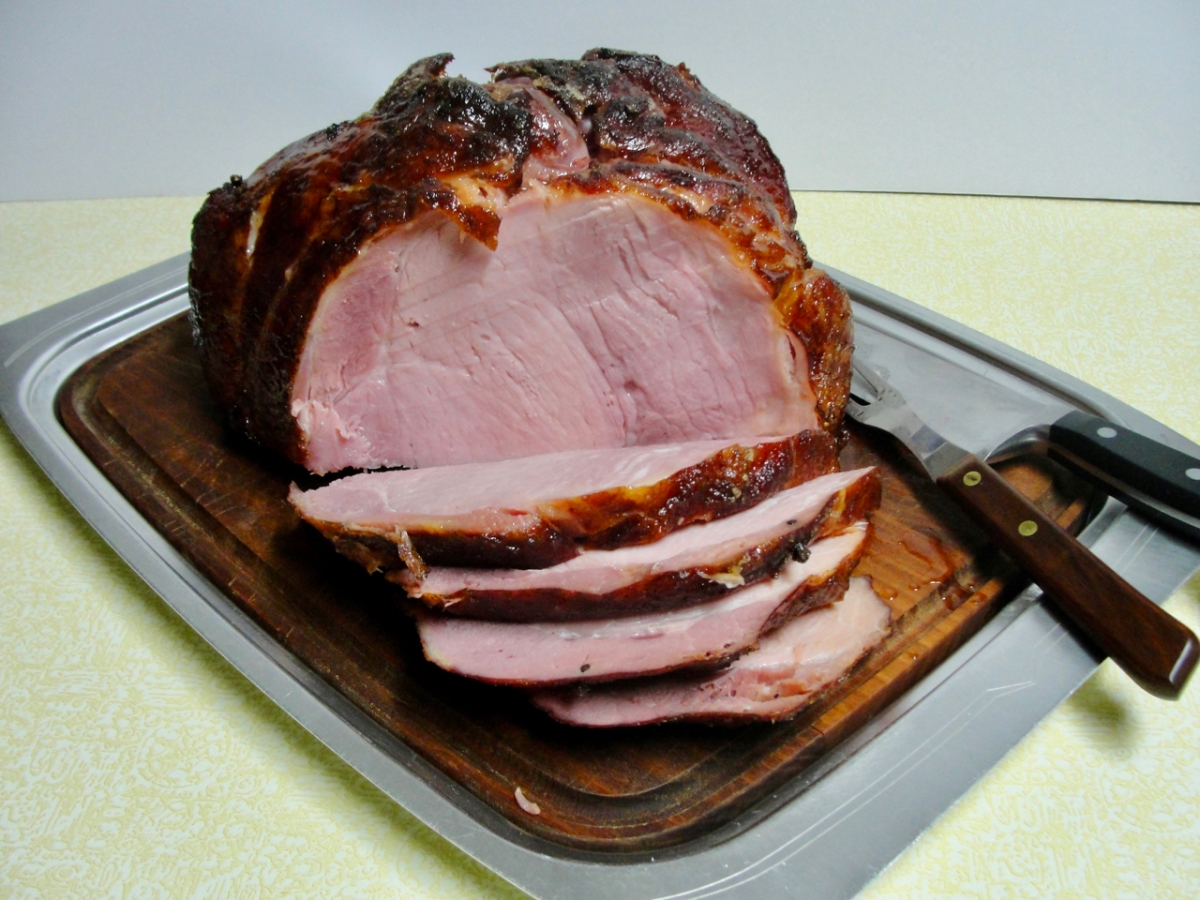 Dorothy Parker is credited as having once observed that “Eternity is a ham and two people.” Though I am not a mathematician I am aware that half of eternity is still eternity, but leftovers from half a ham disappear in less time than they do from a whole ham, so my recommendation is that you ask for half a ham from the butcher. It will weigh somewhere between eight and twelve pounds.

If he (or she) tells you that they sell only whole hams, ask him (or her) to cut and wrap it in two halves. You can bake one half now and freeze the other until you have finished the leftovers in a few weeks.

A properly baked ham is a marvelous meat. Start with a top quality real smoked ham, not one flavored with liquid smoke. Avoid the cheapest hams on display. Most chain grocers sell these inexpensive hams processed in factories that inject water and various flavorings into the meat so it weighs more and looks juicy.

Water is cheap, but pure water has very little flavor. It adds nothing to the ham except weight but does increase the profit for the processor, wholesaler and grocer. Notice that you as a customer are not on that short list.

The best way to get a good ham is to buy it at one of the many meat markets scattered throughout the United States. Those of us fortunate enough to live in Wisconsin or Minnesota have no trouble finding a good ham. Study the awards and ribbons displayed on the walls of the shop. If you find a fairly recent award for ham, you will probably have a good start on dinner.

We have eaten excellent hams from quite a few small markets in Minnesota and Wisconsin, but our favorite source today is Louie’s Finer Meats in Cumberland, Wisconsin. Louie’s hams have won awards from Frankfurt, Germany to Milwaukee, Wisconsin, and we are lucky that the market is located along the highway we take to our cabin.

We stop nearly every trip north, but usually for bacon, brats, or some prize-winning sausage for sandwiches. Serving a ham requires planning so before you buy it you might want to organize a family reunion or invite a football team or two to share dinner or at least make sure you have some extra room in the freezer for leftovers.

After our first ham dinner, we cut the meat off the bone and package it in meal-sized portions before it goes into the freezer. It still tastes fresh and delicious a couple of months later and can be used for everything from sandwiches to casseroles. One of our favorites is Jerri’s Ham and Swiss Lasagna . Incidentally, be sure to leave some meat on the bone to make Mom’s Boiled Dinner.

To create those leftovers, you need to bake your ham. A good ham has lots of flavor already, but a glaze brings it to perfection. There are many opinions about what makes a great glaze, but I prefer a very simple recipe of four ingredients that add color and flavor to the finished product. I hope that you try it sometime.

Preheat the oven to 325º. Put the ham fat side up uncovered on a rack in a baking pan. Use a thin sharp knife to poke twelve to sixteen shallow holes in the ham three to four inches apart over the top and sides of the ham and insert a clove into each hole. Set the roasting pan on a lower shelf in the oven and set the timer for ninety minutes.

Make the glaze by whisking the syrup, sugar, mustard and vinegar together in a small bowl while the ham is cooking.

When the timer reminds you, remove the ham from the oven and brush about half of the glaze over the ham. At this time you can insert a meat thermometer into the thickest part of the ham or if you have an instant-read thermometer, simply return the ham to the oven and continue baking for thirty minutes more.

Check the internal temperature of the ham at this time. It is done if the thermometer reads 145º; if it does not, bake it a few minutes longer. You can baste the ham again when you check the temperature. The baking time depends on the size of the ham.

NOTES: If your roaster is too small to accommodate your baking rack, crumple aluminum foil to make four or five cigar-shaped rolls about a half inch thick and set the ham on them in the roaster.

I almost always visit Louie’s web site before we head north to check out the In-store Specials. Recently I spent a few minutes reading about recent awards won by Louie and his team. Louie’s champion bone-in ham took first place this year at the Wisconsin State Fair and sold for a record price of $8,100 at the 4-H Auction. The $30 I paid for our half ham was a real bargain!