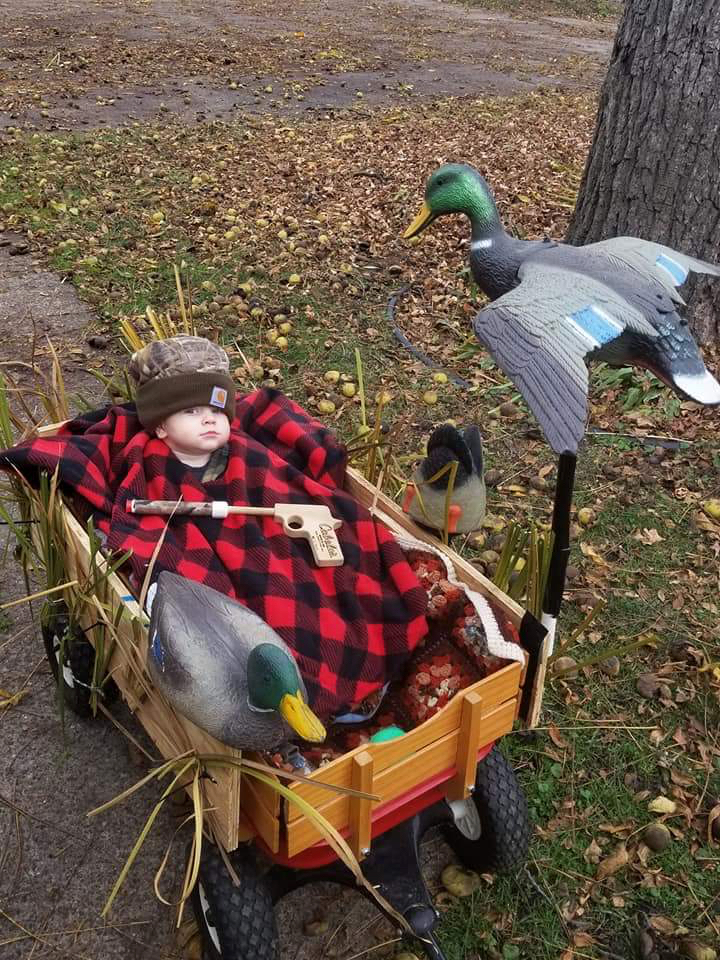 Wyatt wasn’t saying much, but he was alert and ready for action. The decoys had been set next to the blind and a mallard was flying overhead. He wore a camouflage hat as any good duck hunter knows is necessary, but his red and black plaid shirt would have betrayed him to the sharp-eyed duck above. It was pretty cold for a hunter-in-training, however, so the shirt was a good idea. If he had a chance to use the pop gun on his lap, at least he wouldn’t be shivering as he aimed.

Wyatt did well for a hunter just approaching his first birthday. He didn’t make a sound, just paid close attention to the stuff going into his trick or treat bag. My guess, however, is that most of the goodies ended up in Matt’s lunch pack to keep Wyatt’s dad warm in the blind or as snacks for Brianna as she put together Duck, Duck Goose.

A few days after Halloween, Brianna appeared at our door with a quart of this creamy wild rice soup made with ducks and geese that Matt brings home. We savored every spoonful, and I asked Brianna if she would let me share it on Courage in the Kitchen. She said yes, but there was still a problem.

I no longer hunt ducks or geese and therefore lack a key ingredient of Duck, Duck, Goose. I remember clearly my last hunt over decoys. My friend Bob and I had set our decoys at dawn on the south side of Totagatic Lake. It was November and a twenty-mile-an-hour wind was blowing snow mixed with freezing rain into our faces. As we slowly sank into the water on the bog and watched the bluebills riding the waves far out in the lake, it occurred to me that I was not enjoying the experience.

Thereafter I confined my duck hunting to sneaking up on teal on the ponds in my grandfather’s pasture. The best days for doing this was when it was sunny and warm. As a bonus, if there were no teal on the ponds, I could head for the thorn apple trees in the pasture in hopes of finding a grouse or two. The pasture is now a forest and I have not tried jump-shooting ducks for many years.

In all but a handful of the recipes for things that Jerri always makes, I cook every dish that shows up in this blog. However, Brianna was kind enough to give me her recipe, answer my questions and review the recipe after I had typed it out, so I’m confident that you’ll be able to put this really delicious soup on your table.

If you like wild rice soup but don’t have any wild ducks and geese, you might try Turkey Wild Rice Soup. I make it a couple of times a year with the remains of the Thanksgiving and Christmas birds that I bag at the local supermarket. We like that soup a lot, but Brianna’s version of Duck, Duck Goose is a soup that any hunter or hunter’s wife should make at least once every season.

The recipe makes a lot, so you can invite some friends or family members for dinner or share with the neighbors.

Start by cooking the cleaned duck and goose breasts. It is very important that all the feathers and pellets have been removed from the meat. Remove any skin that may have been left on the breasts. You can render some wonderful fat from duck and goose skins. My grandmother saved this fat for making really tender pie crusts.

Put the breasts into a slow cooker with enough water to cover the meat by a half inch or so. Set the heat control to low and cook the meat for ten hours.

About an hour before putting the soup together, remove the duck and goose breasts from the cooker and allow the meat to cool while you start the rice.

Rinse the rice in cold water and put it into a large kettle or stewpot. Add the water and salt and bring the pot to a boil. Reduce the heat and simmer the rice for fifty minutes. Check to see if some of the rice grains have popped open. If they have, the rice is nearly done. You can test it by chewing a few grains. They should be chewy but tender. Cook the rice a few minutes longer if you wish. Drain the water from the pot and set the rice aside.

Put a tablespoon of olive oil into a large pot (at least eight quarts) and cook the chopped onions over low heat for three or four minutes until they have become translucent, stirring often. Add the carrots, celery, chicken stock and wine and bring the pot to a boil. Reduce the heat and simmer for about twenty minutes until the carrots are just becoming tender. Stir the meat and rice into the stock and vegetables. Raise the heat to bring the pot back to a very low simmer.

Make the roux while the pot is coming back to a simmer. Melt the butter in a skillet or heavy bottomed saucepan over moderate heat and stir in the flour with a wooden spoon. Reduce the heat and stir the flour continuously while it mixes with the butter and begins to bubble. Keep stirring for three to four minutes to cook the flour. Do not brown the roux. Remove the pan from the heat and allow the roux to cool slightly. Whisk two cups of slightly cooled broth from the the large pot into the roux, then stir the roux into the soup and simmer for another two or three minutes until the soup thickens.

Stir in a cup of whipping cream, bring just to a simmer, taste and adjust the seasoning. Do not boil.

NOTES: I normally use a sauvignon blanc or other dry wine in chicken or vegetable soups. However, Briana specifically said that she likes Riesling in this recipe, and she is absolutely right. The sweetness of the Riesling complements the meat perfectly.

I prefer to make roux in a cast iron skillet, but I also use heavy-bottomed saucepans. If you don’t have heavy-bottomed pans, use very low heat and be careful not to burn the roux.