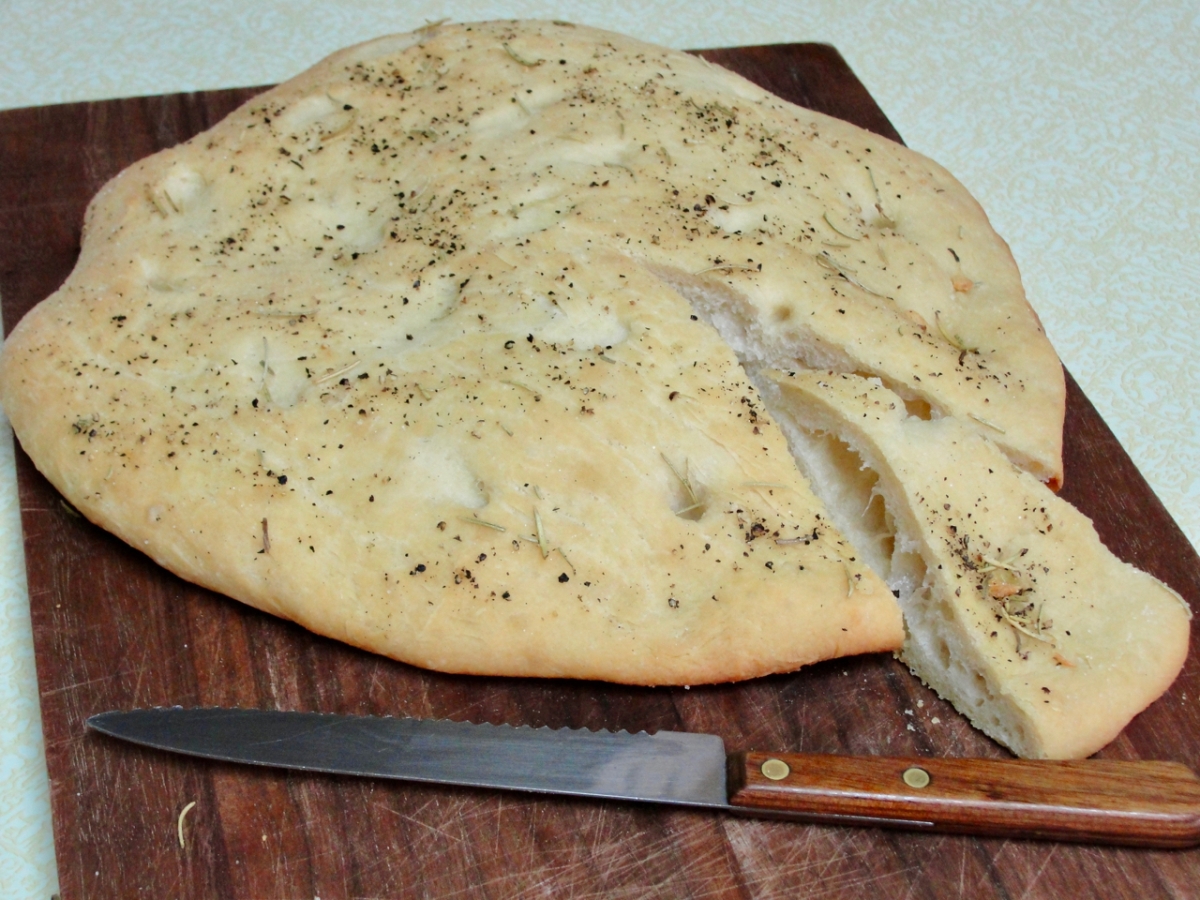 This is another recipe with a “Very good!” note in Jerri’s handwriting, which explains why we have been making and eating Pizza Caccia Nanza for many years. Beard credits the recipe to Edward Giobbi’s book, Italian Family Cooking. It is a garlic bread that is not overpowered by the garlic or the rosemary, the two primary spices. You might think of it as focaccia with fewer calories.

Jerri made the first adjustment to Beard’s recipe: She doubled the ingredients, obviously believing that if you are going to make something that tastes good, it makes sense to make enough for leftovers. Together we have made other adjustments: We use a little more yeast to speed up the rise, use dried rosemary instead of fresh and reduce the amount of olive oil.

The result is a flavorful bread that tastes good warm or cold. It can be dipped into a red sauce or eaten plain. It goes well with a glass of wine before dinner. Since the dough rises twice, it takes a little longer to make Pizza Caccia Nanza than some breads, but on the other hand you don’t need to let the bread rise once you put it in the pans.

Heat two cups of water to lukewarm. You can test it by shaking a drop on the inside of your wrist. If the water feels slightly warm, it is about right. Pour it into a large mixing bowl. Stir the sugar and yeast into the water and allow it to proof. When bubbles begin appearing on the surface of the water, stir in a cup of flour and allow the batter to sit three or four minutes. Then stir in the salt and another cup of flour.

Add the rest of the flour one cup at a time, stirring thoroughly between additions. After you have stirred in the fourth cup, stir in another half cup and keep adding flour in small amounts until you have a dough that comes off the sides of the bowl. This will normally be between four and three-quarters and five cups of flour.

You will begin kneading the dough, so scrub your hands like a surgeon.

Let the dough rest in the bowl for three or four minutes while you prepare your work surface by dusting it with flour. Turn the dough out of the bowl, using a spatula to scrape the bowl clean and to turn the dough until the surface is well floured. Knead the dough for six to eight minutes until it is soft and elastic.

Form the dough into a ball and let it rest while you grease the mixing bowl. Canola or olive oil spray works great for this. Put the dough into the bowl, turning it so the surface is coated with grease. Cover the bowl with a damp tea towel and put the bowl in a warm place to let the dough rise until it has doubled in bulk. This will take from an hour to an hour and a half, depending on how warm it is in your kitchen.

While the dough is rising for the second time, remove the paper and stem ends from the garlic cloves and stage the rosemary on a saucer. Slice the garlic into thin slivers and set them aside on another saucer.

Flour your work surface again and turn the risen dough out for a second kneading. Knead it for three or four minutes and form it once again into a ball. Make sure the bowl is still well greased and return the dough to the bowl. Cover it again with a damp towel and let it rise again until it has doubled in bulk. This will take less time than the first rise.

To form the loaves, turn the dough out on the floured work surface and knead it for a minute or so. Divide the dough in half and make two balls. Use the palms of your hands to make two circular loaves about a half inch thick and ten inches in diameter. Generously grease two baking sheets with olive oil and put the loaves on the sheets.

Use a small knife to make indentations about one inch apart on top of the loaves. As you make the indentations, push a sliver of garlic into each one and sprinkle the rosemary over each loaf. When you have finished, dribble about a tablespoon of olive oil on each loaf and rub it gently over the surface.

Sprinkle with salt and grind some black pepper on each loaf.

Bake for twenty to twenty-five minutes until the loaves are golden brown. Remove the garlic slivers after the loaves have cooled a bit. Cut in wedges like a pizza to serve.

NOTES: Our round pizza pans work well for baking this bread. If you have a really large baking sheet and oven, you could of course put both loaves on that sheet. If you prefer a stronger garlic flavor, increase the number of garlic slivers you put on each loaf.