I was in third grade at Blair School 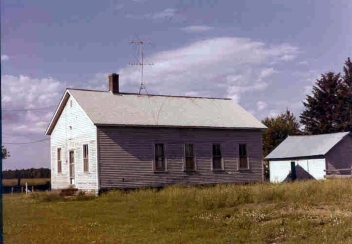 and looking forward to the Valentine’s Day party. Before any students arrived on that February 14th the teacher placed a cardboard box labeled “Valentines” in the cloakroom. The cloakroom was a narrow room that extended the full width of the school building with the outside entrance door in the middle and two doors spaced about a fourth of the way from each end that led into the schoolroom. There were two rows of coat hooks, a low one for little kids like me and a higher row for the big kids and parents who came for meetings and parties.

The cardboard box already had valentines in it that we had made during art class the day before. With round-nosed scissors and plenty of paste we had turned red construction paper and white note paper into fanciful hearts with homemade lace doilies carefully inscribed with the names of our schoolmates. As we filed into the building, we added handfuls of valentines to the box.

Like most kids I had spent the evening before the party punching out valentines from a book I had picked out at the Five and Dime. The hardest part was figuring out which valentine to give to which girl. Mom made me send valentines to the boys too, which I thought was really stupid. After a good pout, I got her permission to omit my name from those cards.

Years later I learned that the teacher put the box in the cloakroom instead of by her desk so kids whose families couldn’t afford to exchange valentines wouldn’t be embarrassed by not having any to put into the box. Everyone got a lot of valentines including a store-bought card from the teacher who also passed out all the cards in the box. The teacher got one from nearly every student, and most of us even remembered valentines for the cook and the janitor.

After the valentine exchange we had cookies and Kool-Aid, milk or cocoa. Then there was a music lesson (singing songs from the Golden Book) before the teacher sent us outside to work off some extra energy while we waited for the school bus. Valentine’s Day at school was a good day.

The treats continued when we got home. Mom always made heart-shaped sugar cookies frosted with white icing and sprinkles so we had more cookies and cocoa or milk before we did our chores. My sister Barb remembers decorations made with a fine tip on the icing bag, but I just remember sprinkles.

I do remember Mom’s Valentine’s Day cake. She had a heart-shaped pan in which she made a yellow cake frosted with pink icing, sometimes decorated with jelly beans or valentine candies.

After we were married, Jerri baked and decorated a red velvet layer cake for our first Valentine’s Day together. She used a recipe she got from Jeanni at the recipe shower her friends at Maine Township High School gave her after our engagement. We still have the original cake pans with metal sliders that loosen the cake. A year or two later she began the tradition that she follows today. We now have a heart-shaped red velvet cake frosted with butter icing. She still uses Jeanni’s recipe, and the cake is always delicious.

An hour or so before you begin making the cake, put the cup of buttermilk and the eggs on the kitchen counter and allow them to come to room temperature.

Before you make the batter, grease a nine inch round pan and a nine inch square pan. Cut a piece of parchment paper to fit the bottom of the square pan and grease the paper once you have pressed it into the pan. Mix a tablespoon of flour with a half teaspoon of cocoa and flour both pans. Shake out any excess flour. Preheat the oven to 350º.

Cream the shortening and sugar in a mixing bowl. Stir in the eggs one at a time. Make a paste with two teaspoons of cocoa and the food coloring and stir it into the creamed mixture.

Spread the batter evenly in the pans and bake for thirty minutes. The cakes are done when a toothpick inserted near the center of each cake comes out clean. Let the cakes cool completely.

Assembling the cake is simple. Remove both cakes from their pans. Cut the round cake in half, put the halves on two sides of the square cake on a serving tray and frost the cake to hide the joints. Voila! A red velvet heart cake for Valentine’s Day! Yours will likely look better than mine, but we enjoyed it anyway, and I have a picture of a grandson to prove it.

NOTES: Our round cake pans are easy release types. If you are afraid that your round cake might stick in the pan, you could line the bottom with parchment paper as you do with the square pan.