Bananas were a special treat for us kids when I was growing up, so special that I tried to save a small banana that was the hot lunch dessert one day. I tucked it into my jeans pocket to take it home. After lunch I joined a bunch of guys in a softball game. As fate would have it, a line drive hit the banana pocket. I learned two important things from this event: First, bananas are pretty effective softball shock absorbers and second, removing a smashed banana from a pocket is a challenge.

I excused myself from the game and went to the boys’ bathroom where I discovered that I would have to take off my jeans, turn the pocket inside out and wash the offending mush away. The warning bell for afternoon classes rang while I was doing this, so about twenty guys came into the room to find me in my shorts scrubbing my pants in the lavatory.

They were not as amused as the girls in my class when I walked in with a big wet spot on the front of my jeans. Mrs. Coogan was very nice and did not quiz me about the matter, though she did look startled as I carefully walked to my desk near the front of the classroom.

And then I had to ride the bus home, accompanied by laughter and the odor of ripe bananas. My mother sympathized philosophically, “I’m sorry, but I hope you learned your lesson.” I did. I have never put a banana in a pocket again.

In spite of this embarrassing episode, I still thought well of bananas because we had them only once in a while. They were almost always available at the Co-op or A & P but they were expensive. When young people look at old supermarket advertisements and see bananas for fifteen cents a pound, they may wish bananas were that cheap today.

Adjusted for inflation, however, bananas actually cost less now than they did when I was a kid. Fifteen cents in 1950 is the same as $1.50 today, so sixty cents a pound is a real bargain. Mom bought bananas only when they were on sale for ten or twelve cents a pound. Every once in a while she would use a couple of bananas to make banana pancakes. They were her regular thin pancakes with slices of bananas baked into them, but we thought that they were extra good.

I like to use some whole wheat flour in my recipe. The whole wheat gives the pancakes a slightly nutty flavor that I think makes them taste even better. And just think, you can buy the bananas for less than half the price Mom paid!

Use a fork to mix the flours, salt, baking powder and sugar together in a bowl. Stir in the milk, eggs and oil and mix until you have a batter. Don’t worry about a few small lumps. If the batter is too thick to pour, add a little more milk. If it is too thin, add a little more flour.

Heat a skillet or griddle over moderate heat. Spread a half teaspoon of oil on the surface of the pan. When a drop of water sizzles as it hits the surface, the pan is ready.

Pour or ladle a fourth or third of a cup of batter onto the pan and spread it to a five to eight-inch circle. 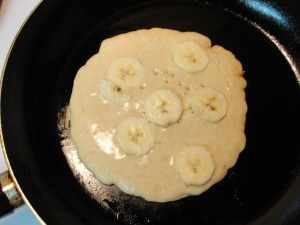 Cut four to six thin rounds of banana on top of the batter. Cook each cake until bubbles start forming in the center and the edges are dry. Turn and brown it for a minute or two on the other side.

Continue with the rest of the batter, greasing the pan very lightly after each cake is done if necessary, until you have enough pancakes for everyone. Leftover cakes can be warmed next day in the microwave.

Serve with maple syrup, butter and bacon or sausage for a real Wisconsin breakfast.

NOTES: You can make oatmeal banana pancakes the same way, and they are delicious. I discovered this at the cabin when we didn’t have any whole wheat flour. We now enjoy them for breakfast occasionally at home as well. Just use the recipe for Easy Oatmeal Pancakes and slice the bananas on the cakes.