Before my mother met and married my father, she played guitar and sang with her brother Basil (nicknamed Blackie) in a small band that played at taverns and supper clubs around Hayward in the late 1930’s and early 40’s. When I asked her how she learned to play, she told me that a neighbor had taught her the basics. Then she had practiced with Blackie and the other musicians who formed their band. She would listen to the radio, write down the lyrics, learn the melodies, and work out the chords, then teach new songs to the band.

In going through old photos I found this one of Mom and Uncle Blackie with their guitars when she was a teenager. 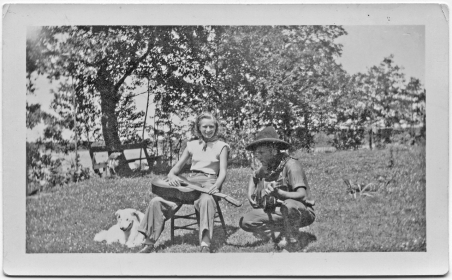 I remember her playing and singing on the front porch when I was a kid. She could yodel too, which really impressed me. I loved her singing and yodeling in “Cattle Call” and “I Want to Be a Cowboy’s Sweetheart.” “Red River Valley” and “Old Shep” were two more of my favorites.

The closest I came to musical stardom was my rendition of “Old Shep” at one of the PTA evenings at Blair School. It’s a wonderful tearjerker. I still sing it to irritate my wife. It opens with “When I was a lad and old Shep was a pup” and concludes, “If there’s a dog heaven, there’s one thing I know, Old Shep has a wonderful home.” To get the right audience reaction, you have to drag out the last few syllables.

Mom had taught me the song and coached my performance. There was no prize, but everyone clapped. Elvis Presley won $5 when he sang the song. Years later, when I learned that, it made me feel proud to have shared something with one of my early heroes.

Dad didn’t sing very much, but he did play the harmonica. On hot evenings in the summer, he would go in the bedroom, bring out the box with the harmonica and say, “Let’s make some music.” Mom would get her guitar and notebook with the words to the songs she knew, and we would all go out on the porch.

One of my favorites was “Little Red Wing” with Dad playing the harmonica and Mom on guitar with the vocal. I can still almost hear those words about the Indian maiden who lost her warrior lover:

Sometimes my sisters and I would join in on the choruses. More often we just listened to music we liked a lot more than anything on the radio.

I don’t remember hearing Uncle Blackie play music with my mother, but I wish I had. When he came back from the war in Europe, he married Aunt Dorothy and they settled down at Hayward. They had a family like ours with kids that she needed to cook for. She still cooks and bakes a lot, and she obliged when I asked for some of her recipes. Here is one of them. Vegetables, hamburger, and starch in one dish. Very tasty too. Try it.

Remove any damaged leaves and rinse the cabbage. Chop about half a medium head into a two-inch dice. You can parboil it in a pot of boiling water for three minutes or steam it for about four minutes. Drain any liquid from the pan and put the cabbage into a large mixing bowl.

Rinse a third cup of rice, then put it in a small covered saucepan with two-thirds cup of water, cover the pan and bring it to a boil. Reduce the heat to very low and cook until all the water has been absorbed, about fifteen minutes. Turn off the heat and put the rice into the mixing bowl with the cabbage.

Brown the hamburger over medium heat. Add the onion and cook until it is translucent. Season the meat and onion with the salt and pepper, then stir in the garlic and green pepper and add the meat mixture to the bowl of cabbage and rice.

Pour two cans of condensed tomato soup and a quarter cup of water into the bowl, add a half teaspoon of sugar and mix everything together. Spoon the mixture into a three quart casserole and bake it covered for an hour.

NOTES: You can use two or three extra cups of cabbage and a full cup of green pepper to make the hamburger go farther. If you do that, add a little extra salt and pepper.

This is a good dish to bring to a potluck.