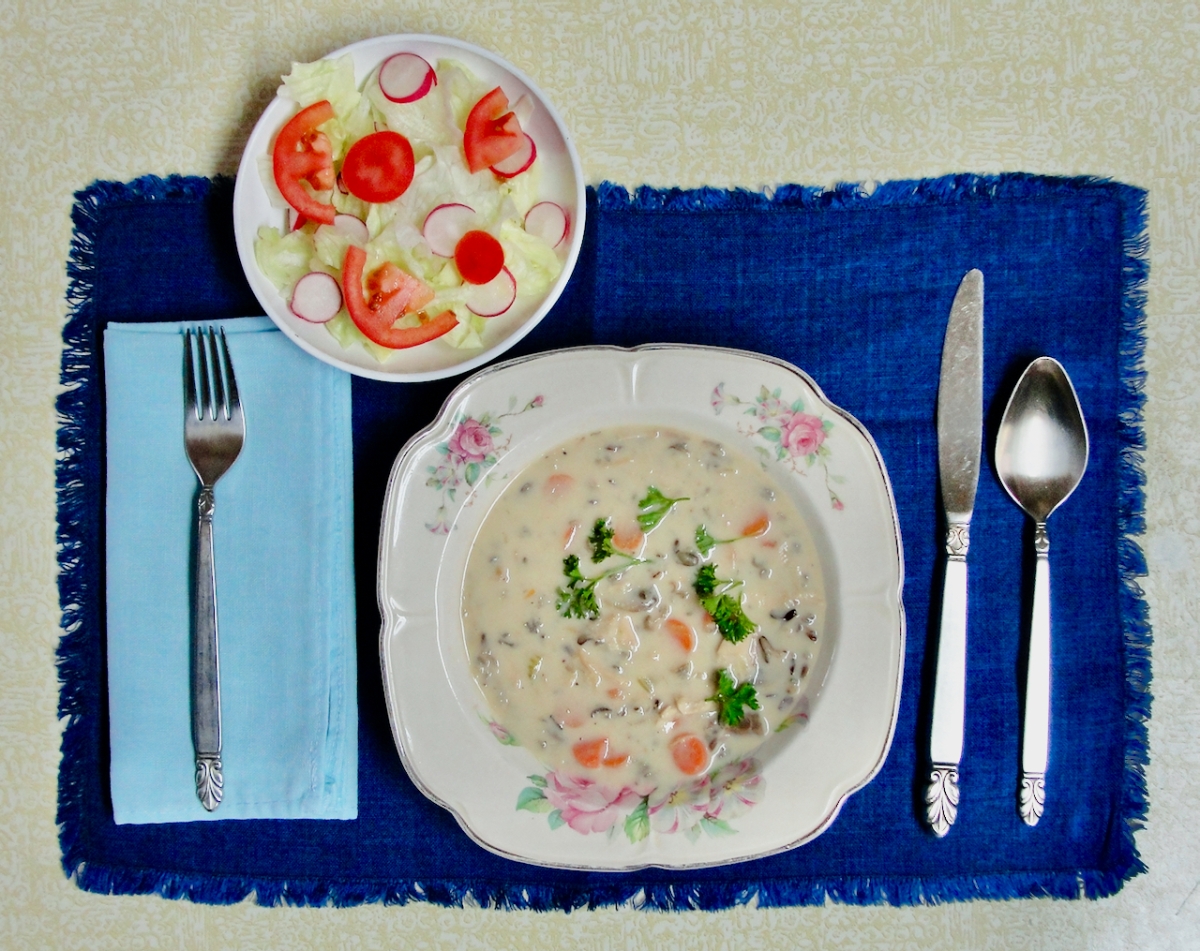 A long, long time ago, shortly after cooking pots came into use, a man was sitting in front of his cave watching his mate boil bones to flavor the seeds she planned to cook for the evening meal.

As the water boiled she turned a piece of meat on a stick over the fire.

“Woman,” said he, “why don’t you put some of that meat into the water?  We can’t eat bones, and that old goat you’re roasting is so tough I can hardly chew it.”

Since she was a good mate, she chopped a piece of the meat off the roast and tossed it into the pot.  Years later she would tell her grandchildren how she had invented soup, interrupted of course by the old man who claimed the credit.

“I told her to add the meat.  She put in the roots and greens later, but she was just trying to make something fancy to impress the folks in the cave down the ledge.”

“It was because the hunting was poor, you old coot,” she would reply, and the children would laugh.

Someone has to apply his or her intelligence to solve a problem or see something that does not yet exist.  The man at the fire in front of the cave wanted tender meat and his mate wanted to cook other edibles at the same time, so soup came into existence.  The person who imagined a cell phone was probably a wife who wanted to remind her husband not to forget the bread and milk or a husband wishing he could apologize in advance for being late for dinner.

Soup might have been invented by different people at different times around the world, or the invention may have spread from some remote cave in China where 20,000 year-old cooking pots have been discovered.  Today, however, virtually everyone enjoys soup, and you can find dozens of soup cookbooks.

I love a good soup and enjoy reading cookbooks. While not thought of as a cookbook, the plot of Stone Soup, by Marcia Brown, is really a recipe for a pretty good soup. I first read the book when I was about five years old. The story is based on a folk tale about three hungry soldiers who get some selfish villagers to supply the food for a pot of delicious soup. I was fascinated by how easy it sounded to make soup.

Marcia Brown, the author of Stone Soup, published another “cookbook” called Skipper John’s Cook, which you can read online complete with the illustrations by clicking HERE. It is a book with a good lesson for anyone who wants to succeed as a cook.

Since we were in leftover turkey time, like Skipper John I was looking for interesting ways to vary the menu but use up the turkey before Christmas arrived. Jerri suggested using some in a wild rice soup. I liked the idea and here is how to make your own turkey wild rice soup.

Rinse the wild rice in cold water, drain it well and put it in a covered saucepan with three cups of cold water. Bring it to a boil, reduce the heat and simmer covered for an hour. Stir occasionally and add more water if necessary. When the rice is done remove the pan from the heat and leave it covered to cool.

While the rice is cooking, clean and slice the mushrooms and clean and chop the onion, carrots and celery into a quarter to half-inch dice. Chop the turkey into bite-sized pieces and clean and coarsely chop some parsley for a garnish.

Melt three tablespoons of butter in a Dutch oven or soup pot over moderate heat. Add a tablespoon of vegetable oil and sauté the mushrooms for about two minutes. Add the onions and cook them until they begin to soften. Then mix the carrots and celery with the mushrooms and onions and season the mixture with the powdered garlic and white pepper.

Drain the rice and stir it into the soup, then stir in a cup of cream and the turkey. Grind a little black pepper on the soup. Bring the soup nearly to a simmer, taste and adjust the seasoning. If necessary, thin it with a little cream.

NOTES: When I first made this soup, my chief taster, proofreader and editor judged it “not as good” as some she had eaten. It needed more salt and turkey, and a more velvety texture. One mistake I made was using half and half rather than cream in my first attempt. Be warned. If diners want to reduce their consumption of butterfat, serve them a small bowl of soup and a large one of salad.

If you serve it like we do, here is what they will see.